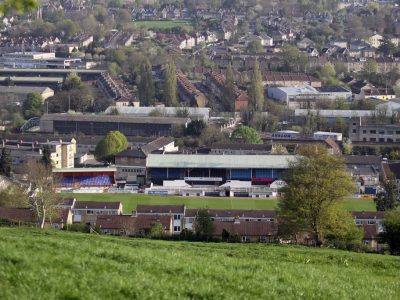 Following the announcement that Bath City FC have entered into a Memorandum of Understanding in respect of the joint redevelopment of Twerton Park and Greenacre’s neighbouring ownerships on Twerton High Street here are a number of questions and answers on the agreement:

What does this mean?

Bath City FC has signed a lengthy document (13 pages) with Greenacre Capital that sets out how both parties aim to undertake a joint partial redevelopment of Twerton Park and neighbouring land that they own.

Is this document legally binding?

The MoU is not legally binding at this stage, but shows our intent, and clearly states all the headline terms upon which a full legal agreement will be based, and both Greenacre and BCFC will now look to agree a detailed joint venture agreement that will be legally binding.

What is the nature of the agreed deal?

The joint venture is structured on an equal, 50-50 basis. Both parties are contributing significant land holdings and all surplus profits will be divided equally. Development proposals will be worked up in collaboration and the development will be undertaken on an ‘open book’ basis.

Who is Greenacre Capital and what does it own?

Greenacre is a London-based private investment company that works across property, independent living and clean energy. The company works in partnership with governments, investors and charities globally to identify investment opportunities that are both profitable and socially responsible. Discussions between Bath City FC and Greenacre have been ongoing for a considerable period of time and in light of these Greenacre recently acquired the parade of shops on Twerton High Street, including McColls and the Co-op, and also a strip of land between this parade and BCFC’s car park, creating the opportunity for a more ambitious development that can significantly regenerate the centre of Twerton. Greenacre’s acquisition of these elements clearly demonstrates their resources and commitment to our joint proposals.

Aside from money, what will Bath City FC be gaining from the development?

While the financial returns are vital to the future of the football club, the main aims of the proposals are to secure a long-term future for BCFC at Twerton Park by repaying the Club’s debts, providing improved facilities for supporters and players, and enhancing the Club’s future revenue streams. The redevelopment will provide a new grandstand, including changing rooms, officials and physio rooms, improved spectator facilities and the necessary club and community facilities needed to create increased year round revenues.

What are the ‘community facilities’?

Development proposals are at a very early stage and ideas are still evolving, and will be confirmed over several months of public consultation. The scheme will be mixed use in nature. Alongside club facilities, we are considering whether the scheme could include a gym, social club/cafe, 3G pitch, meeting spaces and offices. There is likely to be key worker, student and affordable residential accommodation.

What are the timescales?

We are aiming to spend a year working up proposals with the architects and in conjunction with supporters and the community, with an aim to submit a planning application in September 2018 and start on site at the end of the 2018/19 season.

What will happen to Bath City matches while works take place?

The aim is that BCFC will continue to play matches at Twerton Park through the redevelopment process, although this will need to be reviewed alongside any Health and Safety considerations and maintaining facilities for supporters.

What happens if this development does not take place?

Without significant investment in infrastructure and facilities, to generate more income and provide better facilities for supporters and sponsors, the future of football at Twerton Park will be highly uncertain. It is the club’s strongest desire to remain at Twerton Park and play a full part in the local community and provide a “hub” for lots of activities.  If a major development does not take place, creating better facilities for the Club and the community, which will generate more revenue long-term and clear the Club’s debts, the future is likely to see an enforced move to a sub-optimal facility elsewhere and complete redevelopment of the ground, with the Club no longer at Twerton, which we believe would be a major loss to BCFC, Bath and the community.