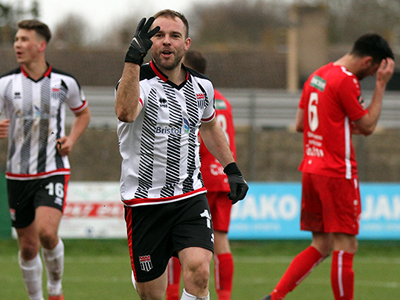 Ross Stearn came off the bench this afternoon to net his second hat-trick of the season and lift City to a 3-0 win over Hemel Hempstead Town. For half an hour both sides struggled to come to terms with the strong blustery wind blowing down the Vauxhall Road slope. The hosts probably shaded possession during this spell although it was Hemel’s Walker who was the busier of the two keepers, saving efforts from James Morton and Freddie Hinds. He was powerless to deny City on 34 minutes though when Ryan Brunt lined up a shot that struck Stearn on the backside to completely wrong-foot the Tudors shot-stopper. Remarkably this was Stearn’s first touch having replaced Sean Rigg less than a minute earlier. The rest of the half saw City on top but they couldn’t add to their lead so Hemel, playing down the slope with the wind behind them after the break, would have been hopeful of turning the game around. This optimism looked justified when Lobjoit fired a good early chance over the bar and then a speculative long-range effort from Parkes forced a back-pedalling Ryan Clarke to tip the ball over the bar. However, City’s passing game was clearly beginning to click and they were soon back on top. And on 68 minutes they deservedly doubled their lead when a surging run forward from Joe Raynes saw his low cross sweetly driven past Walker by Stearn. Just two minutes later Walker failed to hold an Anthony Straker cross and Stearn was alert to steer the ball home to complete his hat-trick. Ryan Clarke still had to produce a couple of excellent saves to deny Hemel a consolation goal and Dan Ball almost marked his return to the side with a goal, heading Stearn’s cross just over the bar, but it was a much improved all-round performance from City to keep them firmly in the play-off picture.