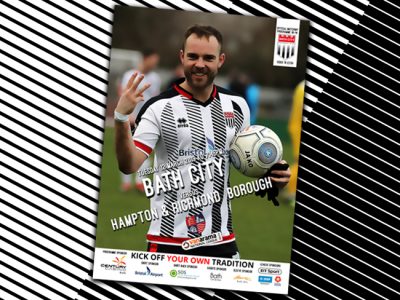 There’s a big match under the lights at Twerton Park! The Romans take on Hampton & Richmond Borough knowing that a win will lift them up to third in the Vanarama National League South! Kick off – 7:45PM!

The original fixture fell victim to the snow at the start of February and The Romans will be aiming to make home advantage count, building on a six-match unbeaten run in Bath. Both sides come into the game full of confidence after picking up three points valuable points at the weekend. City controlled proceedings against Hemel Hempstead and earned maximum points thanks to a Ross Stearn hat-trick which keeps Jerry Gill’s side in the play-offs. Hampton, who were on a six game winless run going into the game, managed to put five past Oxford City at Marsh Lane. Goals from Marcel Barrington, Zak Joseph, Ruel Sotiriou and a brace from Chris Dickson helped pull The Beavers further away from the relegation zone.

There are now just five scheduled league matches left at Twerton Park this season so make sure you’re there to do your bit to cheer on City to the play-offs. Gather friends and family and get along for the thrill of a vital match under lights. We’ll see you there!

Charlie’s Bar🍻: There will be two mini kegs of Bath Ales’ Gem given away in our free raffle after the Post Match Interviews! Just head into the bar after the game to pick up your ticket. Must be 18 and over to enter. Guest ale – St Austells’ Hoptastic 4.3%.