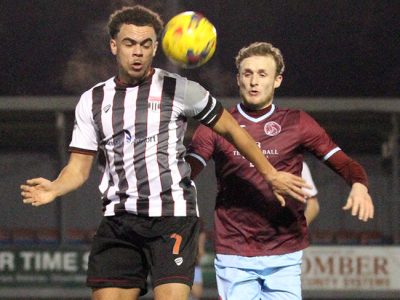 Despite fielding just one player over the age of 18 – 21-year Jordan Simpson – and playing the last quarter of the game with ten-men, City were only beaten 2-0 by a near full-strength Taunton Town side this evening in the 2nd Round of the Somerset Premier Cup. The promotion chasing Southern League Premier South side’s two goals came during the first half, Short scoring on 17 minutes before Sullivan added a second ten minutes later. Unsurprisingly the Peacocks dominated possession but wasteful finishing and several excellent saves by Harvey Wiles-Richards – the only player in addition to Simpson to have previously played for the 1st team this season – denied them a bigger victory. Even after substitute Shaquile Perkins was sent-off with 22 minutes left, for raising his hands to an opponent after being pulled back, the hosts couldn’t add to the scoring, twice striking the frame of the goal with their closest efforts. And City’s young side even created two great chances in the closing stages of the tie but in the end it was Taunton who earned the honour of a trip to Weston Super Mare in the next round.