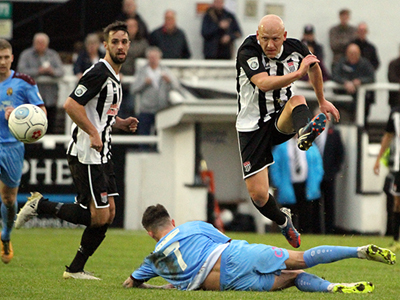 City’s two month run without a Vanarama National League South victory came to an end in convincing style at Twerton Park this afternoon as they swept aside East Thurrock United by four goals to nil. With both sides coming into the game in poor form the opening goal was vital and it was City who grabbed it on 15 minutes when a brilliant run by Opi Edwards ended with the Bristol City loanee firing home from 15 yards. Both sides had chances after this but two further goals for City on the stroke of half-time put them firmly in control of the game. First Miles Welch-Hayes burst forward from inside his own half before unleashing a left-foot shot from just outside the box into the corner of the net, then a minute later Frankie Artus’ back-heel set up Andy Watkins and his shot was turned into the net by Marvin Expetita. The second half saw City content to sit back and protect their advantage which saw the visitors enjoy the majority of possession. However, they rarely threatened Luke Southwood’s goal and it was the Romans who completed the scoring with 14 minutes left, Tom Smith racing clear from Watkins’ pass and sliding the ball past Wright, to seal Jerry Gill’s first league victory as City boss.