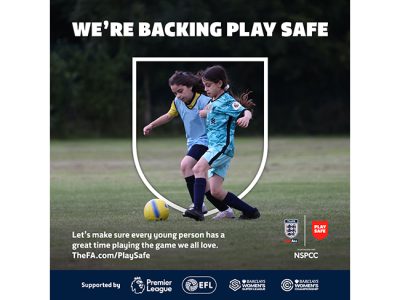 Bath City FC is lending its full support to Play Safe – an ongoing national campaign led by The FA to raise awareness of the importance of safeguarding in football.

Although it runs throughout the year, Play Safe really comes to the fore over football’s National Safeguarding Weekend, held this year on Saturday/Sunday 1st and 2nd October.

The main focus this year is on parents and carers, with two key messages to convey:

Importantly, encouragement to take the new course has come from FASSSAG – The FA’s Survivor Support and Safeguarding Advisory Group:

“We have inputted into the course and helped frame its key messages from our collective experiences. It’s vitally important to us that every parent/carer understands they role they need to play in football. Taking this course can make a real difference – we are asking every parent/carer to commit to help ensure football is ever-safer.”

The support of FASSSAG has been welcomed by FA Chief Executive Mark Bullingham, himself a parent and youth football coach. “The FASSSAG has been important in helping us create our new strategy moving forwards and we really appreciate their input into the new course.  I have taken the new course and encourage all parents/carers across football to take it too. Ultimately, safeguarding is everyone’s responsibility. We all need to ensure that everyone involved in football – particularly children and young people – has a consistently safe and positive experience of our great game.  Play Safe reminds everyone of that responsibility and keeps safeguarding front of mind, which is exactly where it should be.”

Play Safe is being run in partnership with the NSPCC and has the full backing of the Premier League, EFL, Barclays Women’s Super League and Barclays Women’s Championship. It’s also supported and being run across every other level of the game.