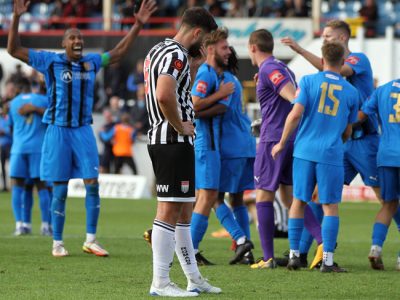 City were knocked out the FA Cup by Sevenoaks Town at Twerton Park this afternoon. The Isthmian League South East Division side scored what turned out to be the decisive goal on 38 minutes when Ndozid’s low shot found the corner of the net. Bamba had missed a glorious chance five minutes early and the visitors were good value for their half-time lead. City started the second half with much greater intensity, Scott Wilson testing keeper McCarthy and several other efforts flying narrowly wide. However, they suffered a further setback on 66 minutes when top scorer Cody Cooke went off injured. Although City continued to enjoy the majority of possession the Kent side were looking increasingly assured at the back and endured few scares before they could celebrate reaching the 4th Qualifying Round for the first time in their history.