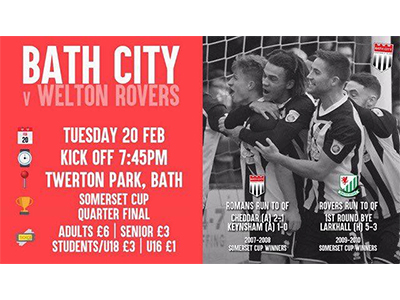 The Romans take a break from the National League South promotion hunt with a Somerset Cup Quarter Final v Welton this Tuesday night at Twerton Park. Following wins at Cheddar and Keynsham earlier in the season, this is City’s first home tie in the local competition and a rare chance to see a match under lights before the end of the season.

Entry is half price or less and it’s the last home match in February, so come along and enjoy the match.

We’ll see you there. Up the Romans!