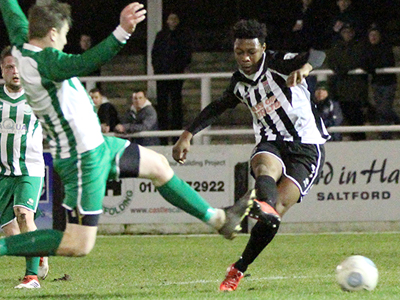 City eased into the Somerset Premier Cup semi-finals with an 8-1 demolition of Western League Welton Rovers at Twerton Park this evening. Leading the way was young Bristol City loanee Antoine Semenyo, who netted a hat-trick, whilst braces from Sean Rigg and Jack Compton plus a Oaklan Buck header competed the scoring, with Chris Pile grabbing Welton’s goal. Semenyo opened the scoring after 11 minutes when he latched onto Andy Watkins’ through ball to slot it past Drewitt in the visitors goal. Nine minutes later Watkins was tripped in the box and Rigg opened his City account from the penalty spot. Just before the half-hour mark a great header from Buck made it 3-0 before Welton pulled a goal back on 39 minutes when Pile’s cross-shot caught Kieran Hodges by surprise at his near post, giving the Green Army’s sizable following something to cheer about. However, within three minutes City restored their three-goal lead as Compton crashed a free-kick against the bar and Semenyo followed up to net from 12 yards. City’s showed no sign of letting up after the break and on 55 minutes a great run and cross by Ryan Case saw Rigg steer home goal no.5. Compton made it 6-1 in the 68th minute with a curling 20-yard free-kick that Drewitt got a hand to but couldn’t keep out. And Compton then repeated the trick from a few yards further out with five minutes left. There was still time for Semenyo to complete his hat-trick with a composed 88th minute finish and secure City’s first eight goal spree since April 1999 when Boston United were on the receiving end.