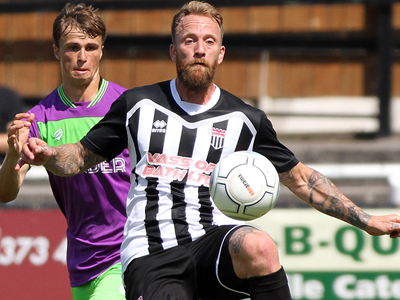 A goal in the final minute of each half from Sean Rigg was enough to make it three pre-season wins out of three against Bristol City U23s at Twerton Park this afternoon. Both sides had played their part in an entertaining first half for the small crowd basking once again in the warm Bath sunshine but it looked to have reached the interval goalless. However, the visitors failed to deal with an Andy Watkins cross on 45 minutes allowing Rigg to fire the ball into the roof of the net. The Robins levelled on 68 minutes, Richards neatly slotting past Ryan Clarke from Harper’s through ball. A slip by Robbie Cundy let in Pearson on 82 minutes but his rising effort struck the top of the bar. Three minutes later City won a penalty when Webb blocked Ollie Mehew’s low cross with his hand but Matt Richards became the second Roman to miss from 12 yards in pre-season, Carey diving to his left to keep the shot out. City weren’t to be denied the win though when Rigg rose highest to thump a header past Carey as the clock ticked over to 90 minutes.