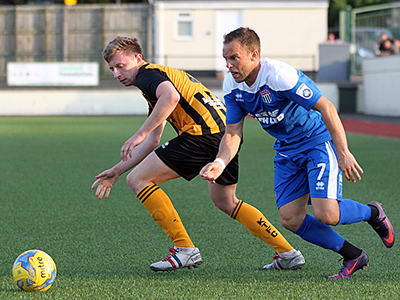 City’s second outing of their pre-season campaign ended in a comfortable 6-0 win at Keynsham Town this evening. Played on the Western League side’s excellent 3G surface it took City just a couple of minutes to open the scoring, Dan Ball given the time and space to lash home a 20-yard shot. It should have been 2-0 three minutes later when Ollie Mehew was tripped in the box but Ross Stearn saw his weak penalty saved by Dunk. The hosts did threaten on a couple of occasions after this lively start from City but on 20 minutes it was 2-0 when Ryan Brunt took advantage of a mistake in the Town box to slot home. And nine minutes later Brunt got his second and City’s third with a cheeky back-heel from Ossai’s low cross. Mehew saw header hit the bar and Dunk twice saved well from John Mills after this although the half ended with Keynsham’s best chance, Cumnock lobbing Ryan Clarke but the ball dropping just the wrong side of the post. Clarke then had to be at his best to keep out Brown’s well-struck shot shortly after the restart. City were soon back on the front foot, Stearn crashing a shot against the crossbar and James Ollis seeing his effort ruled out for offside, and on 56 minutes Joe Raynes made it 4-0 with a great 25-yard strike. Adam Mann then latched onto another error to slide home goal number five with 15 minutes left. Ollis had another ‘goal’ disallowed for offside and Mann’s shot was cleared off the line before Frankie Artus completed the scoring with a 20-yard shot a couple of minutes from time.