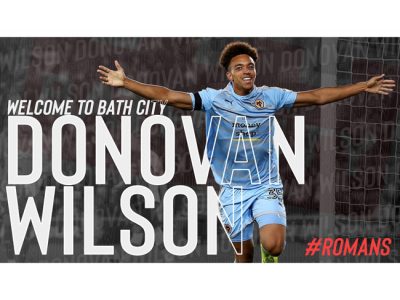 We are pleased to confirm the signing of 23-year old striker, Donovan Wilson, and look forward to welcoming him to Twerton Park.  Having started in the youth set up at Bristol Rovers at the age of seven, Donovan was signed by Wolverhampton Wanderers in January 2015 and has gained EFL experience at Port Vale and Exeter City on loan, as well as two spells in Spanish football at Jumilla and Burgos.

Having worked on completing the signing Jerry commented: “I am so excited we have been able to sign Donovan on a long term contract. He had an offer on the table from a National League Premier club but chose us instead which has naturally really pleased me. I know Donovan not only as a player but also as a person very well. Having worked together for some time at Wolves when he was a U23 player, it helps that the relationship and trust is already there. We are getting a striker who is powerful, athletic and a natural very good finisher. He is hungry to score goals, enjoy his football and progress in his career. I know he will have a big impact on the team and the league with his quality. The fans are going to really enjoy watching him play in a Romans shirt. He is Bristol born and has now settled back home and becomes a huge part of what is now very West Country based squad, which was another aim of mine for this season’s recruitment. At still only 23 years of age this is a key singing as our main striker. I am sure he will be successful for Bath City FC and help us achieve good things and progress as is the target each season”

Having joined training on Thursday evening, Donovan said of his move to City: “I’m really happy to sign for Bath City and get back to playing week in week out after this prolonged break from football. I’ve known Jerry for a while now going back from our time working at Wolves so when he contacted me I knew it would be the right fit. I’m a direct player who likes to score goals. Hopefully I can bring some excitement to the fans and help the team progress even further.”