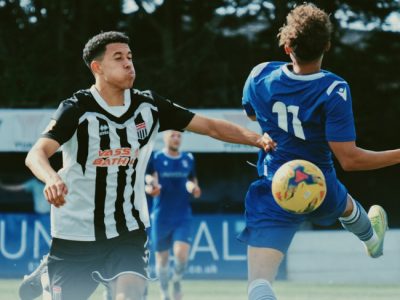 Two second half goals saw City record their first pre-season victory at Swindon Supermarine this afternoon. The win was marred slightly though by the sight of new signing Donovan Wilson limping off after just 15 minutes with a thigh injury that City will hope is not serious. The hosts started the game brightly, forcing Ryan Clarke into an early fingertip save from Kotwica, but as the half went on City began to grow into the game. On 23 minutes a great low cross saw Lloyd James turn the ball over the bar at full stretch. Supermarine continued to pose a threat going forward but neither side could fashion a clear-cut chance and the game reached the interval goalless. The deadlock was finally broken just past the hour-mark when Tom Smith fired home from 10 yards after home keeper Horsell had twice denied one of the four trialists in the Romans line-up. And it was another of the trialists who set up City’s second goal 12 minutes later when his low cross was turned into his own net by Shepherd. Supermarine thought they had pulled a goal back within a minute only for a late offside flag to rule out McDonagh’s close range finish. They did grab a goal with a minute left, Liddiard heading a corner past Clarke, but City held out for the remaining time to secure the win.