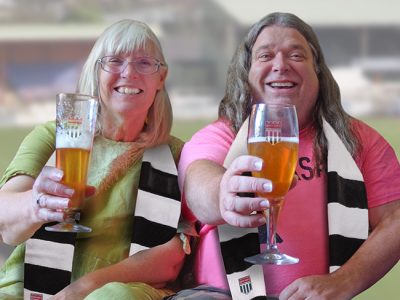 Following the Bath City FC shirt sponsorship draw, in the Abel & Imray Stand at Twerton Park (outside and socially distanced) on 9th September, Bath City Football Club is delighted to announce the winner of the draw was BWW Communications:

‘I am delighted to be able to say that BWW is ‘over the moon’ at the news. I have never enjoyed football more than since becoming a regular at Twerton Park, and I am glad that our sponsorship will help keep the team playing fabulous football for the coming season. Both Hilary Manning-Morton (co-director at BWW and season ticket holder) and myself are looking forward to standing on the terraces again very soon and cheering on the team. Up the Romans!!’

BWW Communications logo will be displayed on the front of Bath City’s first team home and away shirts for the coming season.

Second prize was won by Maddison Plumbing. Steve Maddison is also a keen City fan, and will have his company name on the back of the shirts for next season and commented, “I am very proud to have my name on the back of the shirts and wish Jerry and the team all the very best for the coming season”. Third prize was won by The Guitar and Pedal Exchange who will have their company name on the shorts.  Owner David Kongialis said, “I am delighted to be able to link up with a club whose values align so much with my own and look forward to returning as soon as is possible to cheer the club on to promotion this coming season.”

The club would like to thank the 58 entrants in the draw and look forward to their further involvement in the coming season – their support is particularly appreciated in these challenging times. All entrants will be part of the Bath City FC Sponsors Club for season 2020-2021.