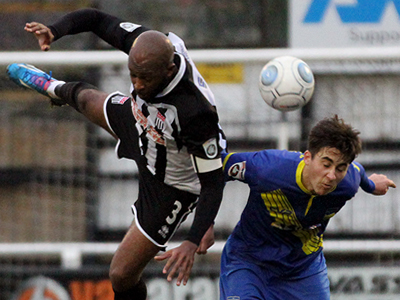 Goals from Jack Batten and Jack Compton saw City overcome Concord Rangers at Twerton Park this afternoon to record a first victory of 2018. The visitors came into the game unbeaten in 13 Vanarama National League South games and did occasionally show glimpses of that form but could have few complaints at the final scoreline. The game was slow to get going, not helped by Concord keeper Wells taking a long as possible whenever he got the ball, although it was the Essex side who had the first sight of goal when a mistake by Anthony Straker gave Freeman a shooting chance which he wastefully steered wide of the goal. Both sides had the ball in the net as the contest began to liven up only for an offside flag to halt any celebrations but two minutes before the break City went ahead. Compton’s free-kick found the head of Batten to end over 500 minutes without a Twerton Park goal for the Romans. The second half followed a similar pattern with City enjoying the majority of possession but Concord looking dangerous on their rare breaks forward. Any worries of a repeat of last week’s late equaliser at Chelmsford were dispelled with eight minutes to go though when Compton picked up the ball on the touchline, surged past two defenders before unleashing a great left-foot shot across Wells into the net.