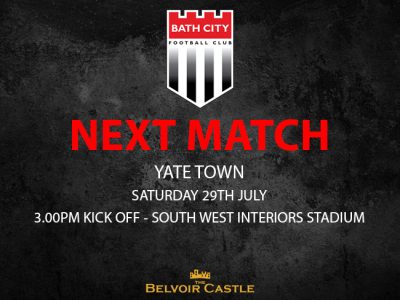 City conclude a promising pre-season against Southern League side Yate Town at the South West Interiors Stadium this weekend. The Romans will look to replicate their controlled performance against Bristol City U23’s against a side that recently took on familiar opponents in Bishop’s Cleeve, where the Town enjoyed a rampant 5-0 victory away from home.

We last met in 2017, in a pre-season fixture where City claimed a comfortable 3-0 win. The fixture provides City fans with the opportunity to watch former Romans striker Stuart Fleetwood in action for Yate Town, who featured for City in a short stint between 2016/17.

It’s a final opportunity for Jerry Gill’s new look side to prepare for the upcoming 2022/23 season against in-form opposition, and is likely to draw a good turnout of City fans at our friends north of the M4.