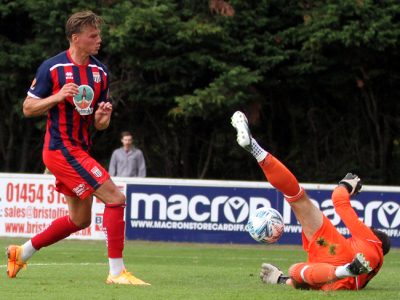 City completed a promising pre-season campaign this afternoon with a 2-0 win against Yate Town at Lodge Road. Both goals came in the opening 16 minutes and it was only a series of good saves by home keeper Horsell that prevented City running out bigger winners. With just three minutes on the clock an Alex Fletcher centre was slid home at the second attempt by Luke Spokes. And 13 minutes later an Elliott Frear cross picked out an unmarked Cody Cooke to head home City’s second goal. City continued to press forward, winning a series of corners that Yate defended well, then Horsell produced a great block to deny Cooke from inside the six-yard box. The second half began with Dan Hayfield seeing his header cleared off the line before another great point-blank save from Horsell kept out Frear’s shot. The Southern Football League Division One South and West hosts were seeing more of the ball going forward but rarely troubled City’s well-marshalled backline and Horsell continued to be the busier keeper, although he did have one more nervous moment when Fletcher’s cross dropped onto the top of the bar. In the end City comfortably coasted to the final whistle to secure a fourth summer victory and turn their attention to the start of the Vanarama National League South at home to Dartford next Saturday.