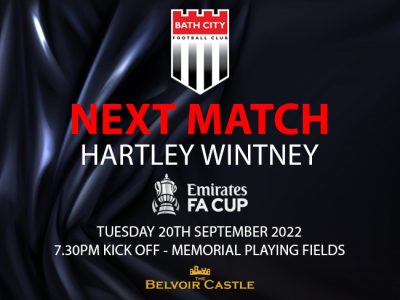 Following the dramatic fightback by Hartley Wintney on Saturday in the FA Cup, City travel to the Hampshire village for a 2nd Qualifying Round replay on Tuesday evening.

First half goals from Alex Fletcher and Cody Cooke looked to have booked a place in the next round but a spirited display in the second half from the Southern League club was rewarded by strikes from Kingsley Eshun and Anis Nuur. The equaliser will probably be remembered as one of the goals of the season scored at Twerton.

City will be hoping to take their pleasing away form in the League into Tuesday’s match, their recent win at Farnborough taking place just eight miles from The Row’s Memorial Fields ground. In contrast their opponents have yet to win there, drawing with Hayes & Yeading but losing to both Swindon Supermarine and Bracknell Town.

According to their very informative website the ground capacity is 1,980 with 250 seats. There are five covered areas from which to watch the game, including two stands with seating. There is a well-equipped, licensed clubhouse and an exterior food vendor offering hot and cold drinks and snacks on match days.

The 84 mile journey by road via the M4 and A33 will take just over 1.5 hours and is the only practical option. Unfortunately there was insufficient interest for a supporters coach and Hartley Wintney is not served by public transport in the evening.

Hopefully there will be a good number of City supporters there to back the team and see them through to the next round of the competition.