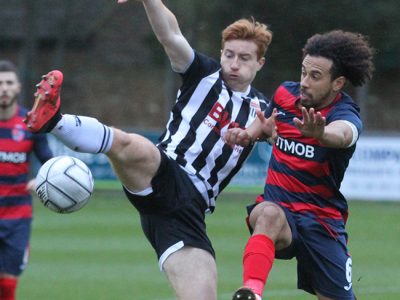 A penalty four minutes from time was enough to give Hampton & Richmond Borough a narrow victory over City at the Beveree Stadium this afternoon. After their enforced two-week break it was a much improved performance by the Romans and they can consider themselves unfortunate not to have at least earned a point from an entertaining game. Two early chances for Tommy Conway and Donovan Wilson – playing together for the first time – saw great blocks from the home side as City started the game strongly. Tom Smith then saw a shot fly wide but the hosts also began to create openings, the clearest when the ball dropped to Deadfield eight yards out but he sliced his shot wide of the gaping goal. Chances continued to fall at both ends of the pitch into the second half, Ryan Clarke saving well from Deadfield and Conway being denied by Julian when clean through. Smith had the ball in the net shortly after this but he had clearly fouled a defender in the build-up and the effort was ruled out. After several more chances came and went for both sides it looked like they would deservedly share the points but on 86 minutes Gondoh went down on the box and Deadfield made no mistake from the penalty spot. A last minute Tom Mehew shot that flashed just wide was a close as City would come to an equaliser as the Beavers saw out five minutes of stoppage time to secure the win.