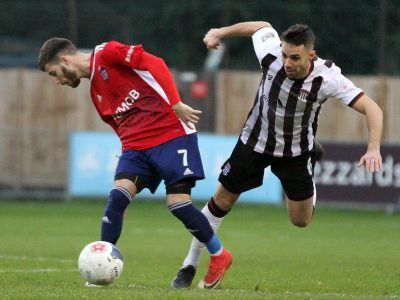 City return to action from their Covid-enforced absence to take on Hampton & Richmond Borough. The Romans have had to sit out the last three fixtures due to positive tests in the camp, but have the all-clear now and are ready to resume the task of building points and climbing up the league table.

Our hosts have had different distractions, with a Cup run that took them to a home First Round tie v Oldham Athletic that they lost 3-2 to their League Two visitors. Since then they secured single goal victories at Hungerford Town and Chelmsford City, but went down 3-0 at home to City’s most recent opponents, Hemel Hempstead Town, on Tuesday night.

In last season’s encounters City were comfortable 3-0 winners at home in the autumn, before a muted 0-0 draw (pictured) between Christmas and New Year at the Beveree.

What – Hampton & Richmond Borough v Bath City
Where – The Beveree Stadium (behind closed doors)
When – 3pm, Saturday 21st November
How to watch – Stream for free on YouTube