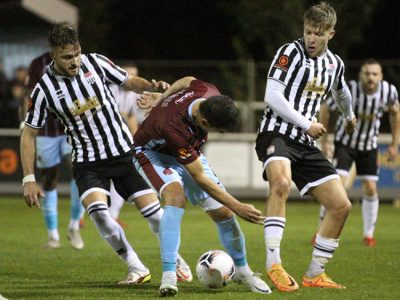 City’s remarkable ‘never say die’ attitude was at the fore again this evening as they grabbed a 97th minute equaliser against Taunton Town at the Cygnet Health Care Stadium. Seconds after they thought they had equalised when Cody Cooke’s header was deflected against the underside of the bar by Foulston, the resultant corner was headed into the net by Alex Fletcher to cancel out Budd’s fluke goal just after half time. The home side came into game having scored just six goals and conceded five in their opening nine games as a National League South side and the first half followed this pattern with little goalmouth action at either end of the pitch. The deadlock was broken within eight minutes of the restart though when Budd’s wayward cross flew over Joe Wright into the net. Cooke twice tested keeper Bycroft shortly after this as City tried to up the tempo. The Peacocks were lucky to keep eleven men on the pitch when McCootie’s late lunge on Wright only earned the ex-City striker a booking. The introduction of Scott Wilson, Elliott Frear and Chris Lines gave City a greater threat going forward but as the game ticked beyond the additional six minutes stoppage time it looked like Taunton would hang on to their slender advantage. However, Fletcher had other ideas with his fifth goal in as many games to secure another hard-fought point for the Romans on the road.