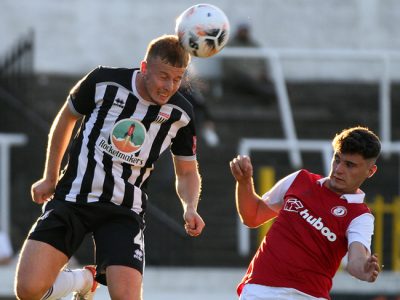 City completed their home pre-season campaign with a 1-0 win over a Bristol City U23 side this evening. The decisive goal came after 22 minutes when Dan Hayfield confidently stroked Alex Fletcher’s cross home from 12 yards. City were good value for this lead as their enjoyed the better of the first half. Fletcher has dragged a shot wide when well placed and Rex Mannings fired over from a Joe Raynes long throw before the goal. The visitors fielded a number of former Romans in their line-up and one of these – Sam Pearson – had their best first half opening, heading Rose’s free-kick narrowly wide. Fletcher was then denied by another ex-Roman – keeper Harvey Wiles-Richards – but the half ended on a sour note when Dan Greenslade appeared to suffer a muscle injury. The second period was a more cagey affair as the Robins enjoyed more of the possession but rarely troubled City’s impressive backline. The latter stages saw Hayfield, Tommy Backwell and Scott Wilson all go close to adding to City’s advantage but it was another good workout for Jerry Gill’s men ahead of their final pre-season match at Yate Town on Saturday.