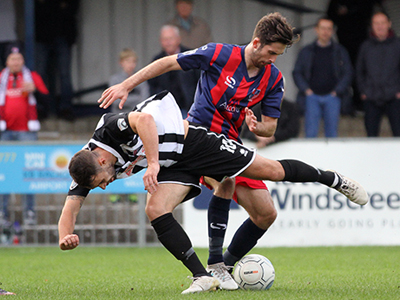 City endured another difficult afternoon as they surrendered an early lead to end up on the wrong end of a 3-1 scoreline against Hampton & Richmond Borough. Having dominated the opening 16 minutes they deservedly went ahead when Marvin Morgan latched on to a Tom Smith pass, rounded keeper Howes and rolled the ball home. City continued to control the game but couldn’t add to their lead and in the final minute of the half they failed to deal with a free-kick into the box allowing Napa to fire Hampton level. Clearly lifted by this the home side pushed forward during the opening stages of the second half as City struggled to get out of their own half. However, once they’d weathered this storm, City were soon back on the front foot and desperately unlucky not to regain the lead when Andy Watkins’ curling shot crashed against the post. Nick McCootie then sent another well-struck shot inches wide and, with Hampton appearing more interested in disputing refereeing decisions, surrounding the Mr Cartmel on several occasions with no punishment, it looked just a matter of time before City scored again. However, instead it was the hosts who struck on 80 minutes when their outstanding player Napa started the move that ended with Kretzschmar netting from eight yards. And they completed the victory in stoppage time when Crawford fired home goal number three.