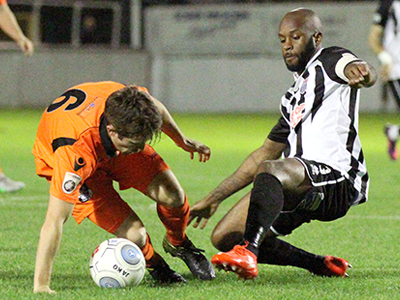 City suffered a narrow 2-1 defeat to new table-toppers Dartford at Twerton Park this evening. The visitors almost scored a remarkable goal in the opening seconds when they had a shot from the kick-off which struck the frame of the City goal. The game settled down after this with City playing their new patient passing game and Dartford trying to get the ball forward as quickly as possible when they won possession. And it was the latter approach that first paid dividends just before the half-hour mark when Pavey headed past Luke Southwood. City levelled in first-half stoppage, Tom Smith opening his account with a low shot from just outside the box. The second half saw City begin to get on top, Marvin Morgan heading their best chance narrowly wide. Then with 19 minutes left a late challenge on Dan Ball by Pugh earned the Darts no.10 a straight red card. Pavey was lucky only to be booked in melee that followed but he took full advantage of the referee’s leniency eight minutes later. Ryan Case’s attempted back pass was woefully short, allowing Pavey to round Southwood and roll home what turned out to be the winning goal. The result took Dartford back to the top of the Vanarama National League South table and leaves Jerry Gill still looking for a first league win since taking over the managerial reigns three weeks ago.