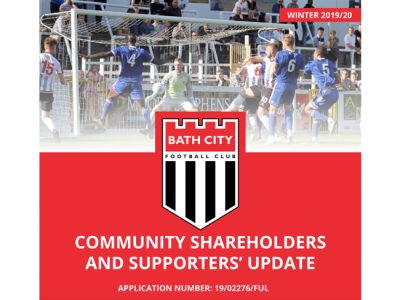 Bath City FC is awaiting the result of a crucial planning application which, if approved, will secure its long-term future in Twerton.

The community-owned club has previously made public its need to make changes in order to remain in Twerton and resolve its own finances. It currently has £1million of debt, due for repayment by 2022, and is still running at a loss.

In 2017 Bath City announced it was working with Greenacre Capital on a joint scheme to both redevelop part of Twerton High Street and Twerton Park football ground. The planning application includes a new grandstand, community hub and a 3G pitch alongside Purpose Built Student Accommodation.

Bath and North East Somerset Council is likely to make its ruling on the application in February.

Nick Blofeld, Chair of Bath City Football Club, said, “We think Bath City FC is an important part of the community and we have played at Twerton Park since 1932. We’re really hoping for a positive outcome from the planning committee meeting as we want to stay here. We have worked closely with Bath and North East Somerset Council throughout this process and we’re appreciative of the advice and guidance they have given us. There has also been a huge amount of support, with record numbers of comments of support on the planning portal from the Bath community, who are keen to see a brighter, more secure club, able to play a bigger part in the community. As a community-owned club, we have done the responsible thing and devised a scheme to help ensure our long term future in Twerton and pay off our debts, and the decision now rests in the hands of our elected councillors in Bath.”

Talking about the wider benefits the proposals will bring to the community of Twerton, Nick Blofeld added, “We firmly believe the scheme developed with Greenacre brings numerous benefits not just for the Club but also the community. There is also a great opportunity here for further investment in Twerton, with the West of England Combined Authority already offering another £650k for improvements if our development goes ahead. A refreshed High Street will attract new shops and businesses and we’ll be creating improved public spaces and a Club with useful, usable space year round.”

The application comes after much work and four rounds of comprehensive public consultation and community liaison, and on the back of the Club’s most successful season for many years, which saw record crowds at Twerton Park, with more than 1,000 spectators regularly attending every game.

You can download the full Community Shareholders and Supporter’s Update document via the link below.