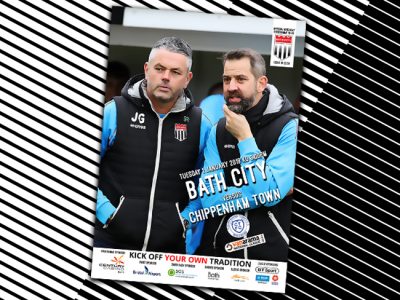 Twerton Park hosts the eagerly anticipated second instalment of the A4 Derby! The Romans take on local rivals Chippenham Town in a Vanarama National League South clash – 3PM kick off!

On Boxing Day the two sides squared up for the first time in over a year and the near 1500 crowd witnessed a scintillating fixture. City went two nil down in a five minute spell as ex-Roman Nick McCootie and James Guthrie put The Bluebirds in the driving seat but a goal from Ross Stearn on the half hour marked certainly turned the tide.

The Romans, now shooting down the slope, dominated proceedings in the second half. The sending off of captain Anthony Straker on 76 minutes only spurred Jerry Gill’s men on and the equaliser came only minutes after. A quick Batten free-kick led to some fine interplay between Stearn and Mann, with the latter delivering an enticing cross towards the penalty spot. Ryan Brunt, City’s top scorer, was on hand to force the ball home, level the scores and send the travelling fans into raptures. City could well have won it in the closing stages but Efete hit his shot into the ground when well placed.

Get yourself down to Twerton Park on New Year’s Day for Part II of the A4 Derby! Bring family and friends, stand on the terraces and get behind The City – it’s a game you won’t want to miss!

There will be EIGHT turnstiles open on the day – six at the Bath End including a Season Ticket turnstile and two at the Bristol End.

Charlie’s Bar 🍻: There will be not one but THREE mini kegs of Bath Ales’ Gem to give away in our free raffle after the Post Match Interviews! Just head into the bar after the game to pick up your ticket. Must be 18 and over to enter. Guest ales – St Austell’s Hicks Strong Ale (5%) and Bath Ales’ Prophecy (3.8%)

Food🍔: Mo-B-Que will be open at the Bath End AND Bristol End during the game along with the Supporters Club Tea Bar on the Popular Side terrace.

Club Shop ⚽️: Our Club Shop will be open pre match and post match as usual!

We’ll see you there – Up The Romans!

PS – Get in the mood by watching extended highlights of Boxing Day’s cracking 2-2 draw – watch now – and watch Jerry’s interview after the 2-0 win at Weston.