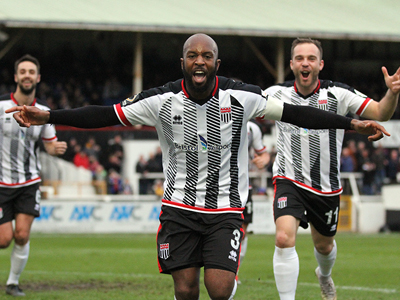 City opened 2019 in perfect style at Twerton Park this afternoon, thumping local rivals Chippenham Town by five goals to nil. The rampant Romans were four goals ahead by half-time, adding a fifth shortly after the interval and then denying the bedraggled Bluebirds even the small treat of a single consolation goal. After an even opening to the match City blew the visitors away with four goals in just fifteen minutes beginning with Anthony Straker’s 18th minute penalty. Michee Efete’s burst into the box was halted by Richards’ desperate lunge and City’s captain made it four out of four from 12 yards. Former City midfielder Compton’s overhit cross forced Ryan Clarke to push the ball over the bar moments later but on 23 minutes Efete’s shot was deflected into the path of Ross Stearn to net from a narrow angle. Stearn grabbed his second and City’s third four minutes later, diverting Joe Raynes’ shot past House from 10 yards out. And the game was over as a contest by the 33rd minute when Straker set up Robbie Cundy to fire home from just inside the Chippenham box. Adam Mann almost added a fifth before half-time, beating House to a long-ball forward but seeing his shot curl inches wide of the goal. However, he only had to wait nine minutes into the second half to strike, Stearn playing him in on goal where he calmly lifted the ball over House. Knowing the job was done City were content to conserve energy after this with tougher games on the horizon and the Bluebird’s could have grabbed a late consolation, Clarke saving well from McCootie and then Ossai blasting the loose high into the Bath night.