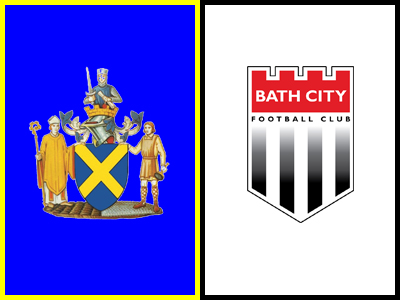 City hit the road again on Saturday when we travel to Clarence Park to face St Albans City. The Saints have made an encouraging start to the season, presently lying in sixth position, with one more point than City. They have won their last four league matches by two goal margins, culminating in a great fight back at Chelmsford two weeks ago after being 2-0 down at half time. However, City will travel with confidence following the fine wins at Oxford and Banbury on our last two trips and we have recorded four wins out of our seven visits to the Hertfordshire town.

And it’s not just a popular venue for our players, as the St Albans trip is seen by many supporters as their favourite of the season. The ground, which has a preservation order and is pleasantly located alongside the adjoining park and cricket ground, has a lot of character with almost as much terracing as at Twerton.

The city itself has many attractions, especially the abbey and Roman remains of Verulamium. But it would be fair to say that football supporters have more interest in the many outstanding pubs on offer, notably The Mermaid, only ten minutes walk from Clarence Park and a great favourite of City supporters for its atmosphere and excellent range of beer and food. There can be few more pleasant build ups to a City match than an hour at The Mermaid, followed by a walk through the Autumn colours of Clarence Park!

A detailed description of the ground can be found at:

And the St Albans website has information for visiting supporters at:

The 125 mile trip from Bath will take around 3 hours or you can let the coach take the strain. The Supporters Club will be running a large coach and full details can be found at:

The train journey from Bath Spa will take around 2.5 hours involving changes at Paddington and St Pancras and a ten minute walk to the ground from St Albans City station.