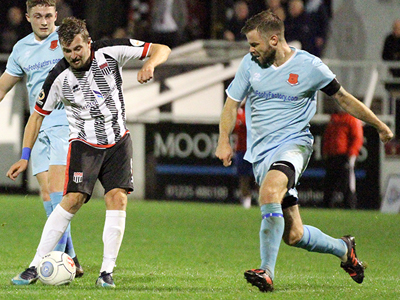 A youthful Bath City side progressed to the Somerset Premier Cup 2nrd Round with a narrow 3-2 win over Bishops Lydeard at Twerton Park this evening. With all the starting XI from Saturday’s FA Cup win over Lewes FC rested, City’s line-up featured just five of the first team squad alongside a number of promising players from Billy Clarke’s Academy side. It was the Western League Division 1 side who struck first on 24 minutes when Kevin Amankwaah was adjudged to have handled the ball deliberately just inside the area and Clunnie fired home from the penalty spot. Their lead only lasted five minutes though as John Mills latched onto a neat through ball to curl a shot past Whately. And City went into the break ahead when on 41 minutes a Kieran Smith cross was steered home by Josh Hall. The second half saw City largely in control and they had come close to extending their lead on several occasions before, with 13 minutes left, Mills jinked his way into the box, rounded Whatey and netted his second and the Romans’ third. To their credit the visitors kept going and on 85 minutes made it 3-2 through substitute Ryder. There were no real scares after that for City as they saw out the remaining time to move into the next round of the competition.