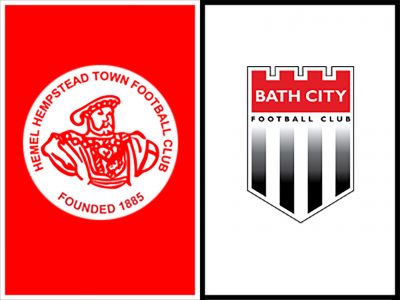 The Romans travel to Hertfordshire on Saturday where they take on Hemel Hempstead Town in the Vanarama National League South. Kick off – 3pm at Vauxhall Road!

City were left frustrated last weekend as former Roman Tyler Harvey helped Truro City snatch a point in a 1-1 draw at Twerton Park. Although Jerry Gill’s side dominated proceedings, chances were spurned and City were punished for not putting the game to bed. Hemel Hempstead Town are the opposition this weekend and The Romans will be aiming to take home all three points as they continue to fight for a play-off spot.

Hemel Hempstead Town are currently occupying 14th spot in the National League South and play their home fixtures at Vauxhall Road, their home for 47 years. The Tudors were battling with City at the top end of the table before the turn of the year but with just one win in thirteen league games, the Hertfordshire club now find themselves 15 points adrift of the play-offs. In the reverse fixture at Twerton Park, a solitary goal from Steve Cawley was enough to give Hemel a 1-0 win in a game that was dubbed a ‘smash and grab’ by Somerset Live. City were in control for the majority of the game but were undone by the former Concord man in the 74th minute to hand Tudors boss Joe Deeney victory in his first match in charge.

The business end of the season is now well underway and The Romans will be hoping for a clinical performance at Vauxhall Road if they are to get maximum points on the road! Safe journey to all City fans who are travelling!