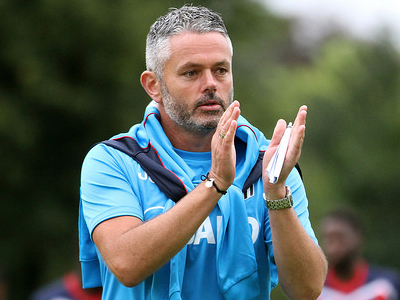 We are very pleased to announce that Jerry Gill has committed his immediate future to Bath City by extending his contract until May 2021. Since Jerry arrived in October 2017, the Club has undergone significant change with its playing style, increased attendances, a greater awareness within the city and a sustained play-off push this season. Jerry has made a success of his first senior managerial appointment with his positive attitude and outgoing personality and we look forward to continue working with him.

“Naturally I am delighted to have agreed a new long term contract with the Football Club. I have thoroughly enjoyed the process of building not only a competitive squad but also creating a new club philosophy on and off the pitch.

I really do feel it’s a very exciting time to manage and be part of Bath City Football Club with the competitive aspirations on the pitch alongside the vision of the Redevelopment Plans.

The brand of football is very important to us all but it’s the type of people that help you create the environment.

The team is full of talent but more importantly we now have the right type of person playing for the Football Club who are here for all the right reasons. I’d like to thank the players for all their hard work and commitment to date.

A special mention to Paul Williams for all his day-to-day support which enables me to do my job to my best capabilities.

A big thank you to Nick Blofeld and the Board of Directors for their support and trust in me.

Also to my support staff Jim, Jason, Lee and Kit who work so hard alongside me so the players get all they need each and every week.

There are too many Club staff, volunteers and people that have gone out of their way to help me to mention, but they’re always appreciated.

And to you the supporters a huge thank you for your patience, shared vision and the fantastic support you have given me since I arrived at the Club.

We as a staff and squad of players are determined to bring you further success for this wonderful football club of ours. The play-offs have been our realistic target since the first day of pre-season and we currently stand in a strong position in being able to consolidate that.

Let’s give this fantastic group of players as much support and encouragement as we can between now and the end of the season”.