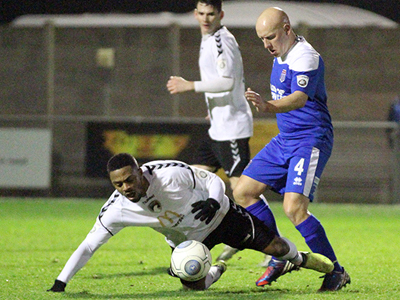 City’s unbeaten start to 2018 came to end this evening as they were comfortably beaten 4-2 by Weston Super Mare at Woodspring Stadium. The home side took the lead after just 12 minutes when ex-City winger Shaquille Hunter drove a low shot past Luke Southwood. They doubled their lead on the half-hour through Lee’s neat finish after his first attempt was blocked. City could have few complaints about the scoreline but within three minutes of the restart they got themselves back into the game. Ross Stearn’s free-kick crashed against the underside of the crossbar and Tom Smith was quickest to the rebound to find the net with a deflected shot. Jerry’s Gill side then enjoyed their best spell of the game but on 65 minutes the Seagulls were awarded a penalty which saw Hill make it 3-1. And City’s night was summed up in the final minute when Jack Batten’s back pass completely wrong-footed Southwood to trickle almost apologetically into the net. There was still time for Ryan Case to make it 4-2 with a well-struck shot but it couldn’t disguise another disappointing outing for the Romans.