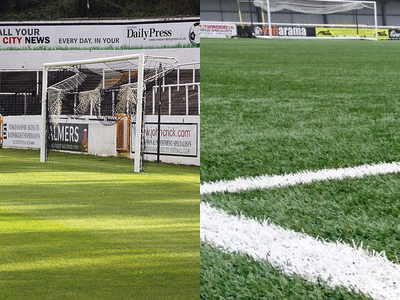 As part of the Planning Application, the Club has submitted a Statement of Intent which outlines the themes of the proposed 3G playing pitch part of Twerton Park’s regeneration scheme.

The Statement summarises that: “Bath City FC, as a community owned football club, is fully committed to managing its activities in the most environmentally friendly and impactful way. The Club has produced this document to provide information about the proposed 3G playing field at Twerton Park. Research conducted into the use of 3G pitches conclude there are no known health implications regarding the use of 3G pitches. Any minimal environmental implications can be addressed through good practice in terms of pitch installation and management.”

Bath City FC, as a community owned football club, is fully committed to managing its activities in the most environmentally friendly and impactful way. This ethos has become even more relevant recently, as environmental issues take on ever greater significance in the public domain. In that context BCFC has carefully considered the environmental impact of installing a 3G pitch at Twerton Park since the Club began work on its own feasibility report into 3G in late 2016. The Club continues to monitor this debate very closely, including the most recent focus by the ECHA in 2019 on the impact of potential micro plastics pollution arising from 3G pitches, by seeking ongoing advice and input as evidenced by the source documents attached to this Statement.

There have been numerous research studies carried out worldwide on the use of rubber crumb in sports pitches to assess any potential health impact. The most recent investigation by the European Chemicals Agency (ECHA) concluded that it has “found no reason to advise people against playing on synthetic turf pitches containing rubber granules as infill materials.”

The conclusions are based on available studies from 10 member states including Finland, Italy, the Netherlands, Portugal and the United Kingdom. Samples were taken from more than 100 fields (infill material already in use) and around 50 samples of newly recycled rubber granules. These conclusions are in line with those recently made by the department of Health of Washington in the United States and the National Institute for Public Health (RIVM) in the Netherlands (see above document).

BCFC has addressed the concern of micro plastics entering the water course via run-off or through drainage systems. While this is also unproven to date, BCFC proposes the following precautions/pitch management will be taken:

The main issue is spillage, a lack of care in handling components, awareness of the need to contain fibres and rubber granulate on-site. Therefore, care should be taken when off-loading and handling the material during installation, through the creation of capture zones to aid clean down.

Material can transported off the 3G pitch and can sometimes be found in the surrounding landscaping, buildings, and even washing machines. Educating users in good housekeeping practices and installing cheap decontamination areas with brushes, compressed air and collection facilities can go a long way to reducing this loss significantly.

Turf filaments are plastic, and while they are highly durable, they do age. Older fields will undoubtedly see a loss in pile length when filaments break off and deposit into the pitch where they become vulnerable to being washed out into the hardstanding areas around the pitch. It is possible with the use of specialist grooming equipment to collect these filaments and dispose of them responsibly. Furthermore, pitches can now be designed to introduce measures to prevent filaments leaving the playing area altogether, successfully retaining them in the playing area itself.

The refurbishment of old pitches has the potential to create waste, spillage, and potential contamination. There is growing interest in recycling and so an ever-increasing amount of old turf and infill is being recycled. Again, BCFC would work closely with its chosen contractor at the time to address the best available recycling options.

BCFC firmly believes the inclusion of a 3G pitch, vital to secure both the future financial viability of the Club and the broader community benefits of the redevelopment (BaNES planning reference number 19/02276/FUL), remains fully justified by the most recent independent evidence it has reviewed concerning the environmental impact of 3G pitches. In particular, the Club’s position is entirely consistent with that set out in the joint industry and Government (DCMS and Defra) Stakeholder FAQ document attached to this statement.  Nonetheless, the Club acknowledges that there is a clear need for it to monitor the latest industry consultation process closely as guidance is likely to evolve in the coming months.  It undertakes to select a contractor and specification for 3G that fully complies with the latest standards in this area at the relevant time, including any revised registration, procurement and infill standards which may be announced in the future as a result of the current consultation process.