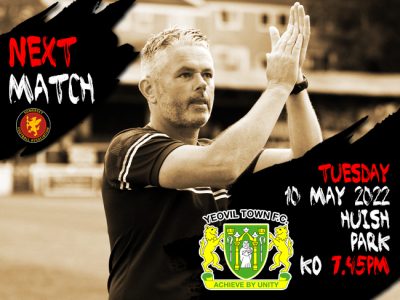 City complete their campaign on Tuesday evening with a trip to Huish Park to take on old rivals Yeovil Town in the final of the Somerset Premier Cup.

They go into the match on the back of their best run of form for over two years against opponents who presently lie 13th in the National League with one game remaining.

To reach the final City have eliminated Clevedon, Portishead, Welton and Frome while Bridgwater, Larkhall, Cheddar and Odd Down have been seen off by The Glovers.

It seems fitting that the two clubs share the record for most wins in the competition at 24 each, City’s last coming in 2008 with victory over Paulton Rovers.

They have met ten times in the final with the last four all being won by City.

Most of those finals were played over two legs and the only previous time when Yeovil hosted a single game final was way back in 1954.

The golden era for us came between 1978 and 1995 when the cup came to Twerton on no less that ten occasions.

City fans have been going down to Yeovil more often than to any other town with over 130 visits and yet there have been only four in the past 26 years.

One of the most memorable was a 3-3 draw in the FA Trophy back in 1994 which saw two goals in two minutes from Adie Mings, the second a fine assist from Jerry Gill!

That was one of eleven matches played at Huish Park since Yeovil moved out of their old sloping ground in the town centre and in all competitions our record there stands at four wins, two draws and five defeats.

Tickets can be bought in advance from the Yeovil website.

The 40 mile trip should take just under 1.5 hours and seats on the Supporters Club coach can be booked here.

City fans travel in large numbers to matches against local rivals and will be hoping that a similar performance to those at Chippenham and Hungerford this season will see the Somerset Cup once again residing at Twerton Park.