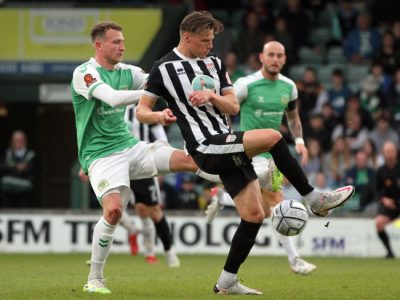 City’s hopes of ending the 2021/22 season with silverware were dashed this evening as they went down 3-0 against Yeovil Town in the final of the Somerset Premier Cup. Playing in the final for the first time in 14 years City got off to a poor start when Williams shot beat Ryan Clarke with just seven minutes gone. Despite this setback City began to take the game to the higher division hosts, Elliott Frear putting in a series of typically testing crosses that had the Glovers defence at full stretch. Tom Smith saw a 20th minute effort only find the side-netting then on the stroke of half-time Alex Fletcher picked out Cody Cooke but his shot was straight at keeper Smith. However, within four minutes of the restart a moment of quality from Yeovil doubled their lead. A great cross-field pass picked out Knowles and he cut inside before lifting the ball past Clarke. Cheered on by the large following of travelling supporters City continued to look for a way back into the game. Tom Richards almost bundled the ball home on 54 minutes before trying a spectacular bicycle kick 12 minutes later that failed to test Smith. Several further good openings came and went for City, although Yeovil continued to look dangerous on their rare breaks forward. And with seven minutes left they ensured their name would be on the trophy when an unmarked Barclay headed home a third goal.