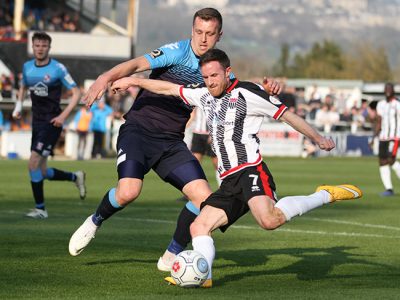 Andy Watkins struck the first goal of his injury disrupted season to earn City a deserved point against title-chasing Woking at Twerton Park this afternoon. His sweet finish on 72 minutes cancelled out Kertzschmar’s first half goal following a rare mistake from keeper Ryan Clarke. City had controlled the opening stages of the game, with only a goalline block by Casey preventing Freddie Hinds giving them the lead, but on 19 minutes Clarke’s scuffed clearance allowed Cadogen to set up Kertzschmar for a simple finish. The tempo of the game dropped after this with the visitors now content to disrupt City’s build-up with numerous minor fouls and slow proceedings down at every opportunity. They rarely looked like adding to their lead though and it took an excellent save from Ross to keep out Tom Smith’s header just before half-time. Clarke redeemed himself on 58 minutes with a stunning save from Kertzschmar’s close range effort then a minute later diverted a Little cross onto the post, the ball rebounding into his grateful arms. This was the last serious scare for City but the equaliser did come somewhat out of the blue as Watkins latched onto James Morton’s pass before firing the ball across Ross into the net. This finally forced Woking back onto the attack but it was City who looked the likelier winners in the closing stages, their best chance seeing Durojaiye produce a great tackle to deny Smith as he lined up to shoot. With the point leaving the Cards title hopes hanging by a thread, City maintained their six-point play-off cushion and it’s quite possible the sides could meet again in just over a months time.