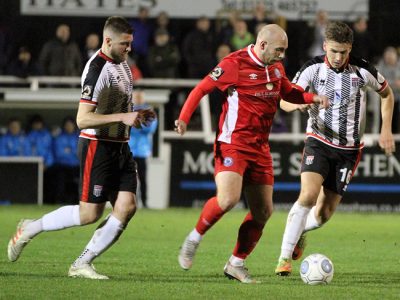 It took a fluke second half strike for title-chasing Billericay Town to edge past City by two goals to one at Twerton Park this evening. The Romans more than matched the high flying visitors only for a cross from Deering with 19 minutes left to curl straight in and see the three points head back to Essex. City suffered a pre-match blow when influential midfielder Sean Rigg picked up an injury in the warm-up however they more than played their part in a breathless opening to the game, striking first on nine minutes. Ryan Brunt’s initial effort was blocked but the ball broke to Ross Stearn and he lifted it beyond keeper Julian. The lead only lasted five minutes though as Emmanuel’s neat finish from Lafayette’s through ball levelled the scores. Both sides then struck the frame of the goal, Billericay’s Kennedy hitting the outside of the post from a free-kick before a stunning shot from Adam Mann thumped against the bar. The rest of the half largely belonged to City, forcing Billericay into a more physical approach, but the game reached the break still level. Ryan Clarke twice denied Emmanuel as Billericay started the second half strongly before Brunt’s header was turned away for a corner by Julian. In-between the visitors survived a frantic goalmouth scramble but on 71 minutes they grabbed the lead through Deering’s unintentional intervention and set about keeping City out for the remaining time. And for the all City’s efforts, including four stoppage time corners with Clarke up to join the attack, they managed this and their celebrations at the final whistle showed how relieved they were to hold on.