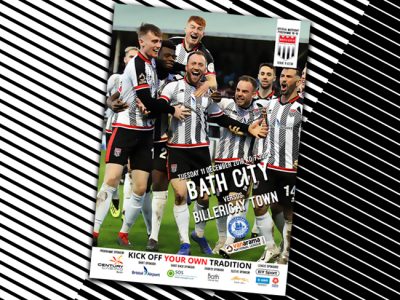 The Romans are back in National League South action tomorrow night as Jerry Gill’s men take on Billericay Town under the lights at Twerton Park! Please note – kick off is 7:30PM for this fixture!

The much talked about Essex side have been hitting the headlines over the past couple of years after businessman Glenn Tamplin bought the club in 2016 and set about re-vamping the club on and off the field. Last season a team which included the likes of Jamie O’Hara, Paul Konchesky and Jermaine Pennant managed to gain promotion from the Ryman Premier Division to the National League South and reached the FA Cup 1st Round. Although changes are afoot due to the shift from training part time to full time, they remain a real threat and Dean Brennan’s side will no doubt be challenging for the title at the end of the season.

Non-league grounds don’t get much better than Twerton Park under the floodlights, so come along, bring friends and family and get behind The Romans as we look to build on Saturday’s draw and push back into the play-offs!

Club Shop ⚽️: Head into the Club Shop to pick up any Christmas gifts or stocking fillers! We also have our half season tickets and festive fives tickets available. More info: https://bath-city-fc.myshopify.com/

Charlie’s Bar 🍻: There will be not one but TWO mini kegs of Bath Ales’ Gem to give away in our free raffle after the Post Match Interviews! Just head into the bar after the game to pick up your ticket. Must be 18 and over to enter. Guest ales – Cornish Best & Navigation New Dawn

Flag Wavers🏁: Head through the turnstiles as normal and meet at the yellow gates by the home dugout at 7:00PM. Must be 6+