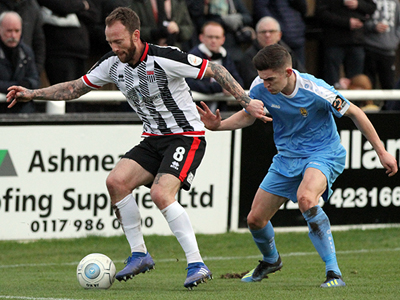 Sean Rigg marked his first start for over a month with the only goal of the game against East Thurrock United at Twerton Park this afternoon. He fired the ball home nine minutes into the second half which, combined with a fifth successive clean sheet, was just enough to see City past the struggling visitors, although they did give the Romans one real scare in the closing stages. Having picked up just two points on their travels so far this season the Rocks understandably set out to deny City time and space, and for the majority of the first half this tactic worked effectively, with a Tom Smith shot that flew narrowly wide the closest the host’s came in the opening stages. When they did commit men forward East Thurrock did pose a threat but it was City who finally began to shows signs they were getting to grips with the game in the latter period of the half. Adam Mann tested keeper Giddens with a well-struck shot moments before the interval and City maintained this tempo in the opening exchanges of the second half. Giddens had to be at full stretch to keep out a deflected Robbie Cundy header then, from the resultant corner, Frankie Artus saw his header blocked but the ball dropped for Rigg to thump it into the roof of the net. Jack Batten also had a header cleared off the line shortly afterwards as City looked to put the game to bed. The second goal wouldn’t come though and a swift break ended only when a poor touch by Derry allowed Ryan Clarke to smother the ball at feet. The same player then almost grabbed an equaliser from nothing on 82 minutes when his low shot hit the inside of the post before bouncing to safety. This was to be the last scare City suffered as they controlled the remaining time to secure a vital three points in their play-off hunt.