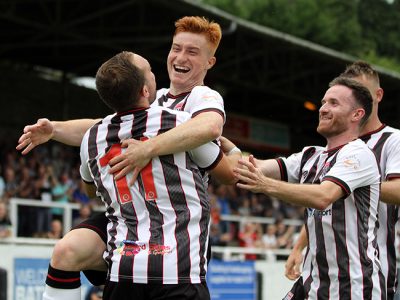 City opened their 2019-20 Vanarama National League South campaign with a 2-0 victory over Braintree Town at Twerton Park this afternoon. After an even opening 45 minutes it was the half-time introduction of substitute Ross Stearn that turned the game in City favour, as he set up Tom Smith to open the scoring two minutes into the second half then three minutes later curled in a stunning 30-yard shot to double the lead. City probably shaded possession during the first half but Ryan Clarke was the busier of the two keepers as the Iron’s pace up front regularly posed an attacking threat. The closest either side came to scoring during the half though was when Urquhart tried his luck from inside the centre-circle. Clarke frantically back-pedalled and managed to tip the ball onto the crossbar but the rebound fell to Richardson who looked certain to score only to scuff his shot straight back at the relieved keeper. Clarke also saved well with his feet from Akinwande and then saw a Cole free-kick hit the outside of his post. City responded with off-target efforts from Joe Raynes, Tyler Harvey and Harry Hamblin, but on 47 minutes they found their range as Stearn’s cross was deflected into the path of Tom Smith to fire home from 12 yards. The cheers had barely died down when the ball broke to Stearn 30-yards from goal and he curled a first time shot over the despairing dive of Johnson into the top corner of the net. Not surprisingly City were now fully in the ascendancy, Andy Watkins, Harvey Smith and Harvey all seeing chances come and go, with Braintree rarely troubling City’s backline. In the closing stages Tom Smith was denied a second goal by a great block and Adam Mann forced a smart save from Johnson but the flying start to the half had long since ensured it would be a great start to the new season.