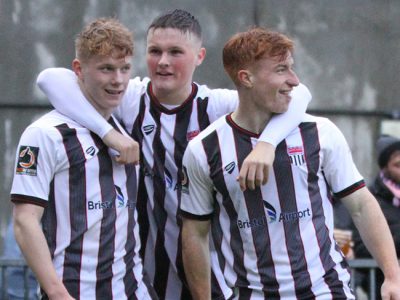 City produced one of their best performances of the season this afternoon to beat Dulwich Hamlet 3-1 at a wet and windy Champion Hill. The hosts made the early running and gave City a few nervous moments but as the half progressed it was the Romans who began to look the more likely to break the deadlock and on the half hour they did just that as Noah Chilvers lashed home the ball from just inside the box. City were good value for this lead but just two minutes into the second half rare hesitancy in their backline allowed Yusuff to steal in and slide a shot under Harvey Wiles-Richards. However, seven minutes later City restored their lead when Sam Pearson broke clear and confidently slotted the ball past Grainger. City went in search of a game clinching third goal but it wouldn’t come, Adam Mann’s shot that clipped the top of the bar the closest they came. This gave Dulwich hope of snatching another equaliser but they found Wiles-Richards – a late replacement for injured no.1 Ryan Clarke – in excellent form, particularly his handling in the difficult conditions. And this allowed City to confirm the win with a third goal one minute into stoppage time, Tom Smith tapping home Ryan Brunt’s low cross.