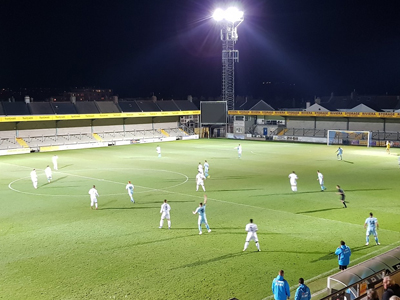 City drew their first game of the 2018-19 season tonight as the came from behind against Truro City at their temporary home in Torquay. The ‘home’ side stunned City by taking the lead after just six minutes, ex-Roman Tyler Harvey netting after City failed to clear their lines. This set the tone for probably City’s poorest half of football of the season as they failed to test the White Tigers, who were more than content to disrupt the pattern of the match through any means neccessary. With the referee struggling to control the game – a situation that only got worse as time went on – there was little to warm the small crowd, epecially the majority who had travelled down from Bath. However, City came out after the interval with renewed purpose and just three minutes in Michee Efete burst into the box before being felled by Richards. The referee pointed to the spot and Anthony Straker was successful from 12 yards for the second time in three days. Buoyed by this Joe Raynes and Adam Mann both had efforts saved by keeper Corey Harvey. Although City were now well on top they couldn’t create any clear openings and Ryan Clarke had to be at his best to keep out Keates’ long range effort. Both sides had a few nervous moments after this but the only incident of note came a minute into stoppage time when Truro goalscorer Harvey saw red but it came too late for City to make a man advantage count.