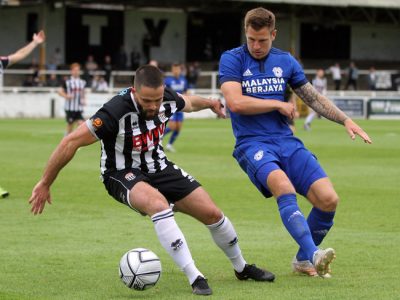 City continued their pre-season campaign this evening with a 2-1 win over Paulton Rovers at Winterfield Road. The Romans raced into a two-goal lead in the opening eleven minutes. On four minutes a cross by Tom Smith was completely misjudged by Paulton keeper Scrivens and the ball somehow found its way into the net. By contrast, the second goal followed neat build-up play by the Romans, which saw Cody Cooke’s pass allow Eddie Jones – who’d only been on the pitch four four minutes as a replacement for Ben Gerring – to round Scrivens and slot the ball past two defenders on the line. City continued to dominate the game but couldn’t add to this flying start and on 34 minutes a mistake by Jayden Neilson allowed Ibrahim a shooting chance. Although his effort hit the post, O’Hare was on hand to tap home the rebound. The second half was a more scrappy affair with personnel changes for both sides disrupting the pattern of the game, though Alex Fletcher and Tom Richards both had good chances to increase City’s lead. The closing stages saw the hosts spurn two clear-cut openings to deny City the victory, Thomas shooting wide on both occasions with the goal at his mercy.