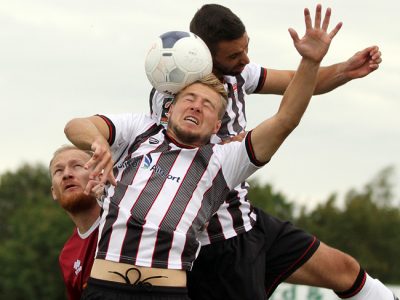 City suffered a third successive single goal defeat thanks to a second half penalty at Chelmsford City this afternoon, in a game that will mainly be remembered for the performance of the officials rather than the efforts of the two teams. In keeping with the rest of the 90 minutes the award of the decisive penalty was controversial, though both sides had legitimate cause for complaints over decisions made by Mr Staynings and his assistants, but, on goalscoring chances if not quality of football, the Clarets just about deserved the win. The clearest of these came on 11 minutes during a bright start by the hosts, Higgins somehow slicing the ball wide from just a couple of yards out. City’s best first half opening saw former Romans keeper Pentney push a deflected shot from new signing Dan Rooney behind. With a strong breeze blowing across the open and uneven Melbourne Stadium pitch both sides struggled to impose themselves on the game but a double substitution by Chelmsford, introducing Knott and Jeffers, just before the hour mark turned it in their favour. Five minutes later the former easily went to ground under pressure from Connor Riley-Lowe but it was enough to see the referee point to the spot from where the latter sent Ryan Clarke the wrong way. City huffed and puffed after this but were largely kept at bay by Chelmsford’s defence and it was the hosts who came the closest to adding to the scoring, Clarke saving from Jeffers with the last kick of the game.