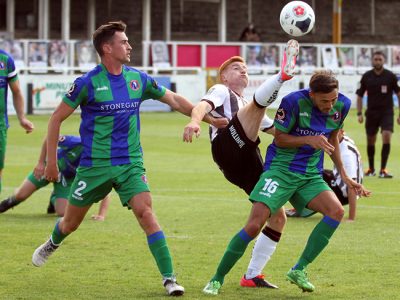 City’s long-awaited return to action was ended after just one game as they were narrowly beaten 2-1 by Dorking Wanderers in this afternoon’s Vanarama Eliminator at Twerton Park. The visitor’s goals came at either end of an entertaining first half and, despite Ryan Brunt’s penalty with ten minutes left, this was just enough to see them progress to a semi-final tie with Weymouth next weekend. The game was just six minutes old when City failed to clear a free-kick and McShane netted from 12 yards out. Despite this setback City soon started to push forward and look for gaps in the well-marshalled Dorking rearguard. Tom Smith fired a free-kick straight at Howes, Alex Hartridge headed a corner narrowly over and Adam Mann saw his shot superbly blocked by Beard. They were desperately unlucky not to equaliser on 35 minutes when Tom Smith saw his 25-yard shot crash against the bar. Dorking had continued to pose a threat on the break and one such attack in the 41st minute saw McManus cross for Prior to head past Ryan Clarke via the underside of the bar. The second half saw City struggle to maintain this pressure with Dorking now content to slow the game done at every opportunity. Chances became few and far between at either end of the pitch but with ten minutes left Ryan Brunt’s shot was blocked by Dyett’s arm to hand City a lifeline. Brunt confidently converted the penalty and City threw everything they could at Dorking for the rest of the game. However, it wasn’t until the final minute of stoppage time when Andy Watkins’ shot flashed inches wide of Howes goal that they came close to completing the comeback. There was still time for Dorking manager White to receive a red card for abusive language but he had hardly disappeared down the tunnel before the referee’s whistle signalled the end of the game and with it City’s promotion dreams.