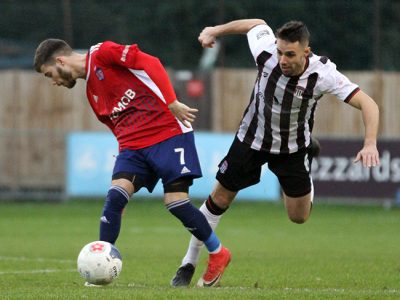 City ended 2019 with a hard-fought goalless draw at Hampton & Richmond Borough this afternoon to remain right at the heart of the Vanarama National League South promotion battle. The teams came into the game in good form but found the heavy pitch tough going, a situation no doubt worsened by both having played just 48 hours earlier. The hosts shaded possession but it was City who had the best two chances at either end of the game. On eight minutes they had the ball in the net only for a linesman flag to rule out Tom Smith’s neat finish from Ryan Brunt’s flick. Other than that neither side could create any clear openings for all their efforts and, at times, promising build-up play. City made a tactical change at the break – introducing Connor Riley-Lowe for Ross Stearn and switching to a back five – and this gave them more attacking threat, although it was the Beavers who enjoyed the better of the contest during the opening stages of the second half but once again couldn’t convert this into clear-cut chances. In response Adam Mann headed a great Riley-Lowe cross narrowly over. With 10 minutes left Ryan Clarke was forced into his first difficult stop, pushing Hill’s free-kick behind for a corner. Then in the final minute Dan Bowry almost grabbed the points for the Romans when his low shot struck the outside of the post.