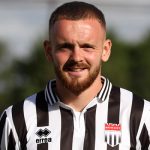 Club captain Kieran joined City in June 2022 from Chippenham Town. He was a product of Newport County youth academy, signing a professional contract in May 2015 and making his first team debut in August that year. He spent a loan spell at Salisbury during the 2016/17 season before being released by the Exiles at the end of that campaign. The central defender joined Gloucester City in July 2017 before moving on to Chippenham Town a year later. He spent four successful seasons at Hardenhuish Park, making around 150 appearances for the Bluebirds, where he was named club captain and selected for the 2021/22 National League South team of the year.