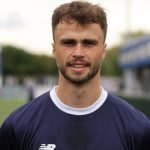 Midfielder James re-joined City on a season long loan from Bristol City in September 2022. After coming up through the youth ranks at Ashton Gate he had a brief loan spell with Chippenham Town in October 2017 before heading to Twerton Park two months later. He went on to spend 18 months with City, making over 50 appearances – scoring once, although this was named the 2018/19 goal of the season – before returning to the Robins, where he signed a four-year contract. He then had loan spells with Forest Green Rovers, Grimsby Town and, briefly, Gillingham. In the summer of 2022 he looked set to join Milton Keynes Dons but the move fell through following a change of management at the club.