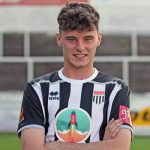 18-year year old defender Callum joined City on loan from Bristol City in August 2021. He began his career at Hereford FC but it was following a move to Cinderford Town in July 2019 that he began to attract the interest of Football League sides, as he began to feature regularly for the Foresters despite being just 16 years of age. He was reportedly on the radar of Forest Green Rovers and Aston Villa before a successful trial with the Robins in late 2020 earned him a contract at Ashton Gate.