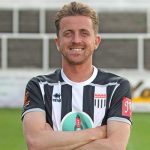 Winger Elliott signed for City in July 2021 after returning to his native South West following several seasons playing in Scotland. He progressed through Exeter City’s Centre of Excellence as a youngster and signed his first professional contract in March 2009. He spent the majority of the 2009/10 season on loan at Tiverton Town before another loan spell with Salisbury City following in October 2012. At the end of that season he was released by Exeter and joined Salisbury on a permanent basis. Elliott enjoyed a very successful 2013/14 season with the Whites which saw him join Forest Green Rovers in June 2014. He spent two and half season with Rovers, during which time he was selected for the England C team, before heading north to join Motherwell in January 2017. The 30-year old played 60 times for Motherwell, including two cup finals, before turning down a new contract and re-joining Forest Green in October 2019. He was back in Scotland in July 2020, signing for Heart of Midlothian, but with Covid restrictions making travelling difficult he struggled to settle back north of the border and returned permanently to his native Exeter at the end of the 2020/21 season.